Winter is an etching,
spring a watercolor,
summer an oil painting,
and autumn a mosaic of them all.
-Stanley Horowitz 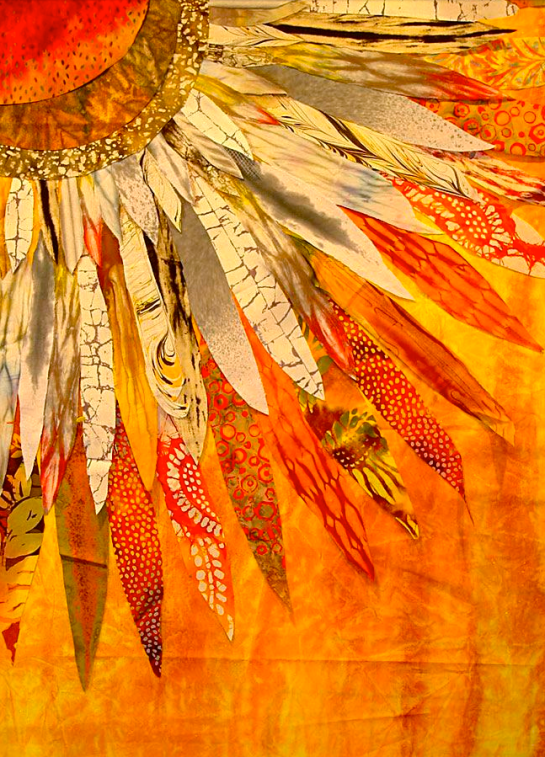 Before one season passes into another, some of what has been comes along with the new blessings and before long the coming one begins easing its gifts into place. For example ripening rose hips are a part of winter’s etching, roses are a continuing bestowal of springtime’s watercolor epic, the now sighing-in-the-wind ornamental grasses appeared on summer’s brush-stroked canvas, and little purple asters aswarm with bees are securing their place in autumn’s developing mosaic, a mosaic not too different from the section of a pieced quilt like the one in the photo.

…the discipline of blessings is to taste
each moment, the bitter, the sour, the sweet
and the salty, and be glad for what does not
hurt. The art is in compressing attention
to each little and big blossom of the tree
of life, to let the tongue sing each fruit,
its savor, its aroma and its use.
~Marge Piercy

Praise be to the God and Father of our Lord Jesus Christ, who has blessed us in the heavenly realms with every spiritual blessing in Christ. ~Ephesians 1:3   ✝

I paid a dime for a package of seeds
And the clerk tossed them out with a flip.
“We’ve got ‘em assorted for every man’s needs,”
He said with a smile on his lip.
“Pansies and poppies and asters and peas!
Ten cents a package and pick as you please!”

Now seeds are just dimes to the man in the store
And dimes are the things he needs;
And I’ve been to buy them in seasons before,
But have thought of them merely as seeds.
But it flashed through my mind as I took them this time
“You have purchased a miracle here for a dime!”

Nowadays a packet of seeds costs more than a dime; yet one can still buy a packet of “miracles” for a reasonable sum.  And the initial investment is small compared to the potential yield not only from the generous number of seeds in each packet but also from the seeds that those plants ultimately produce.  I know because my garden is full of plants started from seeds I never bought.  Not only that but lots of birds eat well on the excess “birdseed” I don’t have to buy.  So it is that in nurturing I am nurtured.  By becoming a part of the “cosmic consciousness,” I  get to participate in the sacred dance of life.

The Book of Genesis tells us that on the third day the Lord created seed-bearing plants and trees.  And from the moment He spoke those words, countless seasons have come and gone and the soil in any given garden has quaked with life from seeds forming in its dark wombs.  As the trembling in “dark wintry beds” increased, an impetus not unlike labor pains pushed roots downward and tiny green shoots upwards toward the light until at last new “miracles” became stable,visible, and tangible.  As more and more darkness melted away in the blaze of lengthening days and intensifying sunlight, the warp and woof of nature began weaving another springtime into existence.  And when the shroud of gloom, winter’s drab garment, was finally sloughed off it was replaced by spring’s brilliant, gauzy garments, garments as colorful as the “silks of Samarkand.”

Isaac sowed seed in that land, and in the same year reaped a hundredfold.  ~Genesis 26:12  ✝

The foliage had been losing its freshness through the month of August,
and here and there a yellow leaf showed itself like a first gray hair…
September dressed herself in showy dahlias and
splendid marigolds and starry zinnias.
October, the extravagant sister, ordered an immense amount of
the most gorgeous forest tapestry to make glorious her grand spectacle.
~Edited and adapted excerpt from Oliver Wendell Holmes 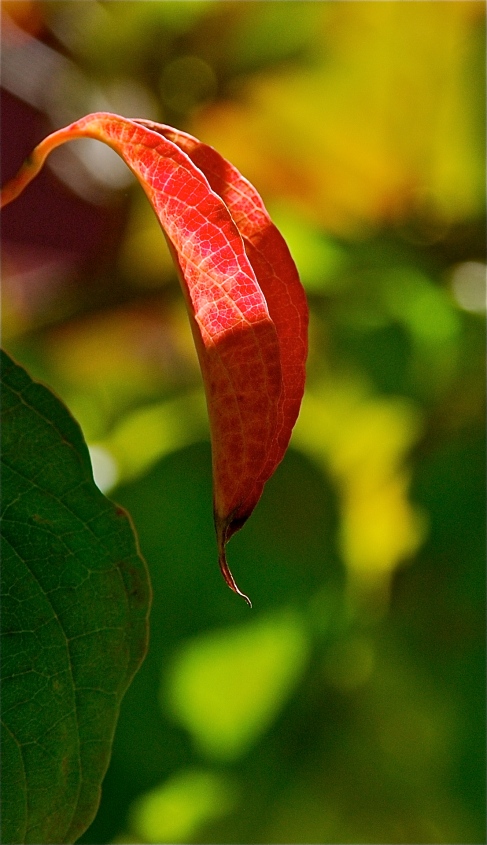 The first leafy sign of autumn appeared on the Dogwood today, and it triggered a flood of “color” musings in my mind.  Chestnut and chocolate!  What’s not to love about a season that clears off summer’s calamities, piles delectable hues back on nature’s palette, and calls for a pot of hot chocolate?  Lemon and lime!  Grasses, flowers, fruits, berries, and even a beastie or two weave fabulous garlands in the sacred temple bound by earth and sky.  Maroon and mahogany!  Chilling winds induce chemical changes in leaves that conjure up magic shows on woody altars in earth’s forests.  Mauve and mulberry!  The leaves on maples, oaks, dogwoods, pears, persimmons, and other trees give birth to colorful, parchment-like jewels that will one day snap off, swirl in little eddies, and play like children upon the ground.  Orange and ochre!  Pumpkins made to squat on porches or bales of hay tickle the fancy of mortal tongues anxiously awaiting fall feasts and winter banquets.  Red and russet!  Roses, asters, and Maximilian sunflowers invoke a breath of spring not stifled by summer’s heat to keep the year’s last child in colorful array.  Sable and sapphire!  Skies often shrouded by gauzy, gray clouds are swept clear by northerly winds as cold fronts advance.  On such days a spectacular brilliance can be seen on the brows of morn followed by daylight hours drenched in deep, dreamy shades of blue.  Sterling and pewter!  Plumed grasses shift and sigh in authorship of haunting, autumnal hymns.  Ah, how lovely are the many colors of autumn and the Holy One who made them!

As long as earth endures, seedtime and harvest (spring and autumn), cold and heat, summer and winter, day and night will never cease.  ~Genesis 8:22  ✝