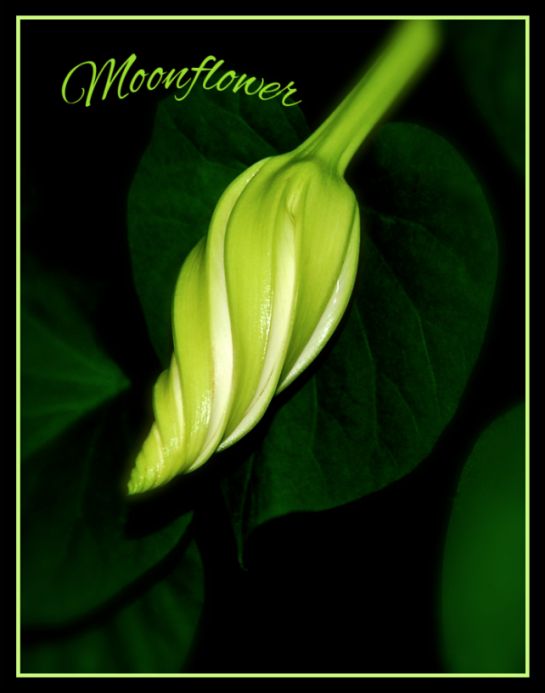 The day is done, it cannot be changed.
My actions and my thoughts reflected
my own spirit on this day in which
of some, I am proud, of some I am not.
When I wake, there will be new chances…
To think and act with wisdom and compassion.
There will be new temptations to be petty, small or selfish…
May I choose wisely and well from waking to day’s end…
and go forth be a blessing to all I meet.
~Edited lines by Anon

If any of you lacks wisdom, you should ask God, who gives generously to all without finding fault, and it will be given to you. ~James 1:5  ✝

**Image of moonflower getting ready to open by Natalie

In my garden fair is a trellis
where climbs a fetching Moonflower,
a curious, twining vine whose blossoms
hide in daylight and open only to the night.
~Edited excerpt from a poem
by Troost Avenue

Oh white blooming moon, you’ve been
Confined in a bud below the day’s bright sun
Shutting yourself in until day is done,
But now dazzling flower that mimics the moon
You’ve unfurled to light up night’s darkness where
Sacred secrets can be told ‘neath a veil of midnight blue
For the light of the moon is the only language
To which you, your majesty, hearken.
~Natalie Scarberry

When I consider your heavens, the work of your fingers, the moon and the stars, which you have set in place, what is mankind that you are mindful of them, human beings that you care for them? ~Psalm 8:3-4 ✝

**I actually got up and out early enough this brisk morn to capture a moonflower before the light caused it to close completely and perish. As you can see, her edges have started to wrinkle however. Moonflowers are in the same family as morning glories, and you can see a few blue ones over and behind it starting to unfurl as the “moonie” closes.

Moonflower in the pale moon light
You unfurl gently and
Willingly to the night’s delight.

Cloistered under the bright
Clear sun, you shut yourself in
Until the day is done. 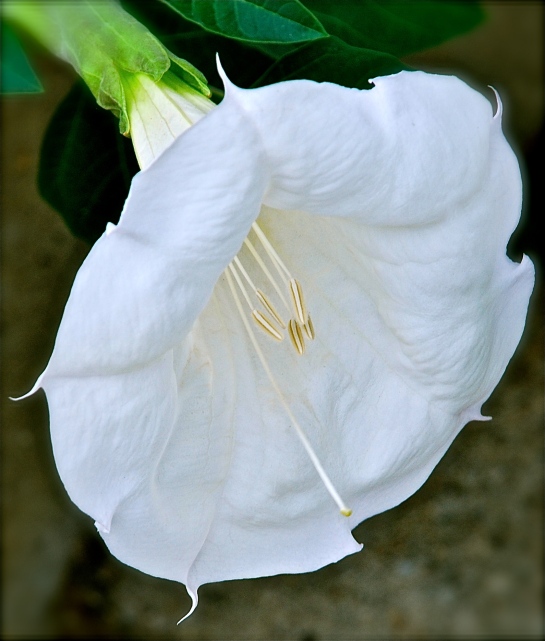 Your secrets are revealed
Only under the veil of darkness
For the light of the moon
Is the only language
To which you harken.
~Edited poem
by Christi Michaels

Well, friends, I’m sorry but I won’t be able to read your posts tonight as I have had a raging migraine since last night and so barely managed to get this post put together and up. With any luck the migraine should play itself out soon, I hope. In the meantime stay safe and be well until I return. Hugs, Natalie

“May the Lord bless this land with the precious dew from heaven above and with the deep waters that lie below; with the best the sun brings forth and the finest the moon can yield…” ~Deuteronomy 33:13-14  ✝

…in the open world it (night) passes lightly,
with its stars and dews and perfumes,
and the hours marked by changes
in the face of Nature.
~Robert Louis Stevenson

This evening sweetly scented perfumes and loud night noises filled the space between heaven and earth. Screeching cricket and cicada choruses rose and fell in unison with the droning engines on the nearby Interstate Highway, and splashes of water in the fountains occasionally added their trickling notes to the developing opus. The day’s winds had slowed but there were still little zephyrs carrying flowery fragrances abroad. Thankfully the day’s high temperatures had lowered as the final remnants of light oozed out of the day taming summer’s heat beast until the morrow’s mid morn when he will again stoke his fires. Early fourth of July revelers were lighting fireworks on the street behind ours, and the soft booms and the quick flashes of light were apparently the cue for barking dogs to join this oddly manned orchestra that was playing “music” through June’s rapidly closing door. Soon God’s lanterns, the stars and waxing moon, were flickering through the trees silhouetted against a deepening indigo sky and creatures, great and small, were beginning to roam, fly, or crawl. Porch lights cast shadowy phantoms over the darkened lawn as the raucous concert played on. Before long the towering trees and the sky merged into a blackened oneness and the din fell into a more subdued humming rhythm. When I rose to come in for the night, I spotted a pearly, luminescent moonflower which I knew would reign as nocturnal queen until tomorrow’s light closed her up and opened the first morning glory to reign on her recently abdicated throne.

The heavens declare the glory of God; the skies proclaim the work of his hands. Day after day they pour forth speech; night after night they reveal knowledge. ~Psalm 19:1-2  ✝