As oncoming summer’s blast furnace begins to heat up so do the colors in the garden. It has literally become a lively fiesta outside my doors and creatures, great and small, winged or afoot, are partaking of the feasts that have been laid before them on Creation’s table.

In fact they’ve been so busy of late supping on the produce of May’s “potent blood” that I’ve only been able to capture two recent “critter” images with my camera. But I wouldn’t keep any of them from their tasks even if I could for what they’re doing not only satisfies their hunger but also mine, and it guarantees that this time next year there will be more.

God’s designs are such ingenious plans! For example these pollinating creatures are so much smaller than we and their lives span such a brief period of time, but what power their tiny wings and feet have in the grand scheme of things! We, mortal humanity that is, think ourselves to be so mighty and yet mankind literally owes its very existence to what comes from the labors of these annual pollinating dances upon earth’s stage. 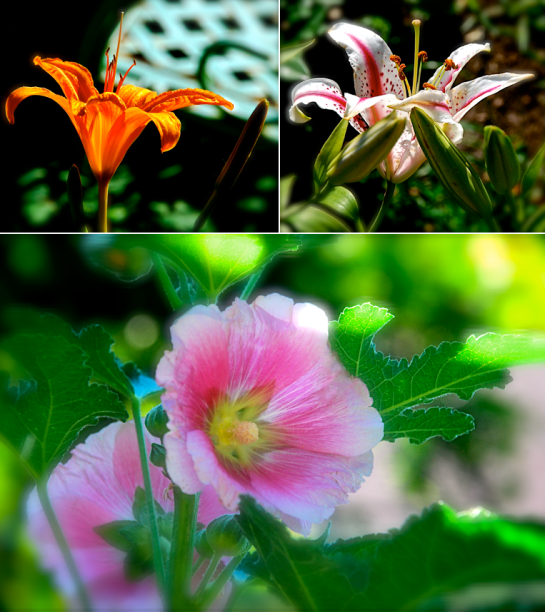 And sadly too many lives play out solely in the technological bubbles of modern society and so are completely unaware of the miraculousness of such scenarios and the utter life-supporting significance of what goes on outside myopic, sterile, and godless environments.

Even the stork in the sky knows her appointed seasons, and the dove, the swift and the thrush observe the time of their migration. ~Excerpted line from Jeremiah 8:7 ✝

**All photos taken in her yard by Natalie

Joy is the sweet voice, Joy the luminous cloud–
We in ourselves rejoice!
And thence flows all that charms our ear or sight,
All melodies, the echoes of that voice
All colors a suffusion from that light.
~Samuel Taylor Coleridge From my hate-the-heat perspective the garden being adorned with crown jewels like these in the collage is one of the few saving graces of a Texas summer. If these flowers had voices instead of brilliant colors, I think that even as buds whose colors had not yet been revealed they would start the day off with soft, murmuring melodies. Then as the day’s flames licked up higher and higher and they burst into bloom, their songs would play on but in loud and bold arias so that the bees, the butterflies, and other pollinators would harken to their lusty, changeling voices. And all the while as the harmonies played on, the insect benefactors would suckle on the tasty fare despite the sizzling sultriness. And I, I would remain the envious onlooker because it is only they and not I who are small enough to crawl down into the gloriously-filled caverns of sweet nectars. Then at day’s end in weariness from performing their noisy choruses and from enduring the onslaught of mugginess their songs would give way to those of the white and silver flowery voices that mingle in with the enlarging and marvelous music of the night. As for me, though saddened by their silence and passing, I would have agree with Barbara Kingsolver who said that “in the places that call me out, I know I’ll recover my wordless childhood trust in the largeness of life and its willingness to take me in” again, another day. Another writer once said that in the isolation and silence of winter one can savor belonging to him or herself. And who knows, perhaps summer allows one to do the same but in a different way, especially when that individual is falling short of being thankful for God’s gifts by fussing about the way they are wrapped.

You(God) turned my wailing into dancing; you removed my sackcloth and clothed me with joy… ~Psalm 30:11  ✝

**All images taken by me in my yard; not all were taken on the same days

The fact that the colors in the flower have evolved in order to attract insects to pollinate it is interesting; that means insects can see the colors. That adds a question: does this aesthetic sense we have also exist in lower forms of life? ~Richard P. Feynman 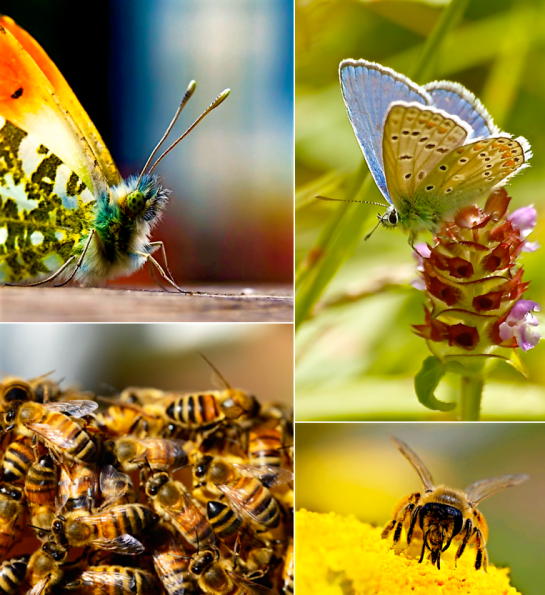 Lively fiestas are going on outside my windows, and creatures, great and small, winged or afoot, are partaking of the flowering banquets. In fact the “beasties” have been so busy moving around and supping on May’s “potent blood” that lately I’ve been able to capture only a few images of them with my camera. But that’s okay because I wouldn’t slow them down a bit for a photo op, even if I could, for what they’re doing is sacred and greatly needed. For not only are they satisfying their divinely designed hunger but they are also guaranteeing that this time next year there will be more glory and bounty in earth’s growing spaces. Only God could devise such an amazing design whereby Creation’s continuance and sustenance belongs not in the hands of the biggest, the strongest, or the smartest but whereby mankind owes its provision of food and therefore existence to pollinators, small creatures whose lives span the briefest capsules of time. Given that, it’s regrettable that much of mankind nowadays lives in godless, sterile technological hubs where the sight of the miraculous in the workings of Creation is lost and the enormous power and goodness of the Lord and what He has granted goes unseen or unnoticed or unaccepted. They are totally unaware or disbelieve that their welfare could possibly be carried out, not by human hands, but instead by tiny wings and feet which they, of course, hold not in high regard or for that matter even acknowledge the possibility of  their vital importance.

I know every bird in the mountains, and the insects in the fields are mine. ~Psalm 50:11  ✝

So often and especially this time of year, both reverence and gratefulness come forth from my ability to see. So I put together some words and collages of places, images, and/or ways that never fail to arouse reverence. As I sat looking out my window, I found great joy in finding the holy in the small and the sacred in the ordinary. Enjoy and count the ways reverence arises in your days.

the hallowed bloomed atop roses, old and new

the sanctified twined and climbed on sundry vines 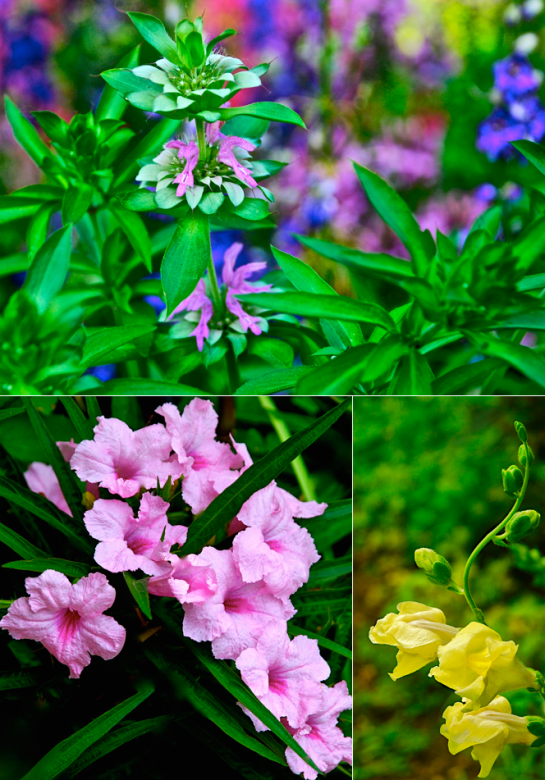 the holy wafted forth from fragant berries and herbs

the sacred was carried on the wings of pollinators 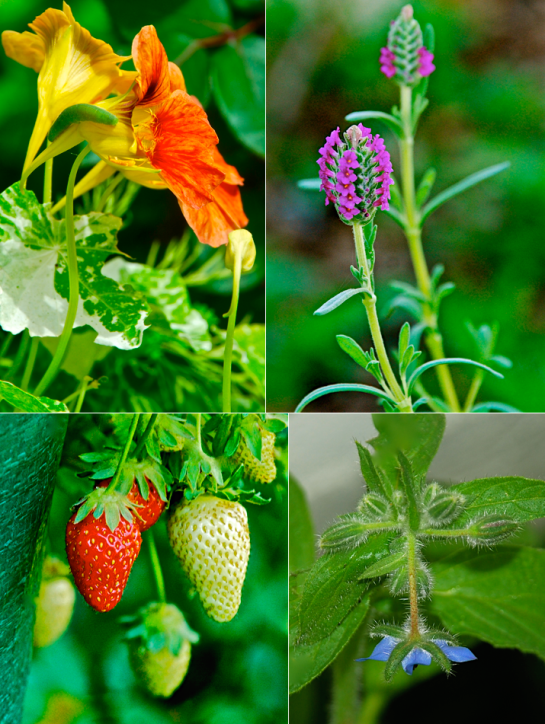 But I, by your(God’s) great love, can come into your house; in reverence I bow down toward your holy temple. ~Psalm 5:7  ✝

**All images were taken in my yard

Let yourself be silently drawn
by the stronger pull of what you really love.
~Rumi

Sometimes reaching a height of 9 feet they tower above all else in a garden, and wherever they grow, their flowers are a magnet for hummingbirds and butterflies. They are the lovely hollyhocks, flowering plants of such antiquity that they were found at a neanderthal burial site. Long after the neanderthal era the hollyhock was grown in religious gardens around churches and monasteries, and seeds of the hollyhock were included in the cargo on early ships to the Americas. Since then they have stood as silent sentries over many a garden fair, and their chalice-like blossoms, when facing upward, have captured and held countless dollops of daylight while captivating mortals with their winsome ways. Now the tall, showy hollyhock, born of the miraculous, is found in gardens all over the world. Miracles? Yes, the first miracle is that all the data needed to replicate this lovely giant and its flowers is stored in something as small as one of my freckles. The second miracle is that for thousands and thousands and thousands of years its small seeds have not perished nor failed in their purpose. The third miracle is that the Lord ordained pollinators along with the sun, soil, and water, to be faithful guarantors of the hollyhock’s lifeline. How could anything be more amazing than that God not only created all that is and devised ingenious ways for everything He made to be replenished, but that he also valued the importance of beauty as well as purpose.

Thank you, Lord Jesus, that you save, you heal, you restore, and you reveal Your Father’s heart to us! May I dwell in Your holy presence and praise Your name for all that you have given and done.

She sat down in a weed patch, her elbows on her knees ,
and kept her eyes on the small mysterious world of the ground.
In the shade and sun of grass blade forests,
small living things had their metropolis.
~Nancy Price, Website writer and poet

This writer is describing a kingdom that exists in probably every square foot of ground in any garden, and it is not a singular kingdom.  In and around blossoming things there’s yet another mysterious metropolis.  In it airborne living things yearn to “possess the sweet of every flower that blooms,” and so in that above-ground realm there really is a very simple equation: if there are no flowers there are no pollinators; if there are no pollinators there are no flowers.  One simply doesn’t exist without the other, at least for very long.  The hum or buzz of the pollinating agent and the flower’s blooming go hand in hand.   Together they dance the dance of life and commit their acts of love.  And so it is that different life forms as well as scripture “remind us that there are other voices, other rhythms, other strivings, and other fulfillments…”  How I’d love to hover over the petals of a rose, peer deep into its center, and then dive in to taste its “sweets” like the wasp on this bi-colored Scentimental rose.

God’s voice thunders in marvelous ways; he does great things beyond our understanding.  ~Job 37:5   ✝

She sat down in a weed patch, her elbows on her knees,
and kept her eyes on the small mysterious world of the ground.
In the shade and sun of grass blade forests,
small living things had their metropolis.
~Nancy Price

In and around blossoming things there is another mysterious metropolis.  This one is above the soil, and therein airborne things move around yearning to “possess the sweet of every flower that blooms.”  In that realm two simple equations are in place:  a) if there are no flowers there are no pollinators;  b)  if there are no pollinators there are no flowers, no fruits, no crops.  The hum or buzz of a pollinating agent and a flower’s blooming go hand in hand; together they commit reproductive acts of love as they dance the sacred dance of life orchestrated by the Lord.  In so doing they “remind us that there are other voices, other rhythms, other strivings, and other fulfillments. . .” in God’s grand plan.

Recently in a National Geographic snippet on the internet, the narrator remarked that present-day humanity is the recipient of a 400,000,000 year old legacy bequeathed by earth. Imagine that!  For all those years the sun has not failed to rise and set at its appointed time, fruits and crops have not failed to burst forth and ripen, and the earth has not failed to make its trip around the sun.  One season has followed another repeating the Genesis story over and over again as per the Lord’s plan.  Like the fruits and flowers and pollinators, our time here is very brief, and we who are fashioned by the same holy Hands as the sun and earth are no less adored and significant in our loving Father’s eyes.

There is a time for everything, and a season for every activity under the heavens. . .  ~Ecclesiastes 3:1   ✝