The most beautiful thing we can experience is the mysterious. It is the source of all true art and science. He to whom emotion is a stranger, who can no longer pause and stand wrapped in awe, is as good as dead; his eyes are closed. ~Albert Einstein 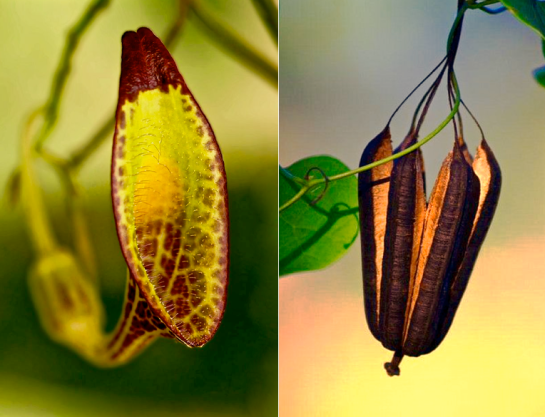 By Einstein’s definition above, I’m not dead yet, for my eyes still open and I frequently stand wrapped in awe when I find amazing things like what you see in these photos. What caught my eye at first was the marker identifying the vine as a Dutchman’s Pipe whose flowers, it said, have an interesting and specialized pollination mechanism. Intrigued by that I read on to find that because they are quite aromatic, their strong scent attracts insects, and that the inner part of their perianth tube (or pipe stem) is covered with hairs that act as a fly trap. Once caught these hairs wither to release the fly who has been covered with pollen. That in and of itself was more than enough to wow me. But now after also having seen the strangely beautiful and mysterious flower and its seed pods, I can, with complete confidence, attest to the fact that my emotions are not yet strangers either. Once again the Lord’s amazing creativity and imagination have stopped me in my tracks and taken my breath away. Chronic pain may have long been my lot in life to bear, but I can do nothing less than continually praise the Lord and express my gratitude for unlike me there are so many people in the world who have little to nothing but misery, grief, suffering, and grievous iniquities dumped over and over again upon their plates. Such is why tears so often flood these eyes that yet allow me to see and emotions erupt that yet allow me to feel.

Can you fathom the mysteries of God? Can you probe the limits of the Almighty? ~Job 11:7  ✝

**Sadly with the recent debacle on computer that I shared with my readers, I’ve discovered that some of my photos are missing or in a black hole somewhere. So I had to use these that I found on Pinterest.

I gathered them–the lilies pure and pale,
The golden-hearted lilies, virgin fair,
And in a vase of crystal, placed them where
Their perfumes might unceasingly exhale.
High in my lonely tent above the swale,
Above the shimmering mere and blossoms there,
I solaced with their sweetness my despair,
And fed with dews their beauteous petals frail.
~Florence Earle Coates

Wow! Don’t ya just love to be wowed?! According to the dictionary “wow” as an expression of excitement was first recorded in Scots in the early 16th century. But the dictionary doesn’t tell us what it was that generated enough excitement to inspire the “wow” in Scots, and I for one would really like to know. I love to be wowed; Creation and the Lord wow me over and over again in ways like no other. Okay, okay, I know; so what is the connection between water lilies and a word that expresses astonishment or admiration. Well…yesterday, we drove through our local Botanical Gardens and I noticed they had put some water lilies in one of their ponds and was thrilled to find something new to “feed” my camera and thus my soul, but wait, that is not what created the “wow” factor although water lilies are “wowish” enough in their own right. It was something I read about them when I got home that prompted the really animated “wows.” According to an encyclopedia, “the Fragrant Water Lily has a unique pollination strategy. On the first day that the flower blooms, its pollen is not yet released. Instead, a fluid fills the centre of the flower covering the female parts. Should an insect visit the flower, the design of the petals causes it to fall into the fluid. If the insect is covered in pollen, the pollen dissolves in the fluid and fertilizes the flower. The next day, no fluid is produced, and pollen is released instead. The insect that falls into the fluid usually emerges unharmed; although a few unlucky ones may be trapped and drown.” Is that amazing or what?! This is exactly why I garden and love gardens and God as much as I do. He is in the goodness and “wow” business, and He does both like nothing else! The world may be in flux at every moment, but the Lord is true and faithful to all His promises and His inherent goodness.

I am my beloved’s and my beloved is mine; he browses among the lilies. ~Song of Songs 6:3 ✝

His Labor is a Chant–
his idleness–a Tune–
oh, for a Bee’s experience
of Clovers, and of Noon!
~Emily Dickinson

Honey bees and bumblebees, it seems, find a flower’s countenance as irresistible as I, and that “irresistibility” is of holy intent.  In the passage of Scripture that follows, we see that the Lord’s plan involved an interconnectedness of all life as well as a dependency, one on the other.  The poet, Kahlil Gibran, explains that connectedness in this way: “a flower is a fountain of life” for the bee, and to the bee and flower “the giving and receiving is a need and an ecstasy.”  But wait, how is any of this relevant in the 21st century?  In the age of incredible and still advancing technology should anyone care about flowers and bees?  Indeed all of us should care because bees are absolutely essential pollinators, and sadly there are now alarming reports which indicate that one fourth of the northern hemisphere’s honeybee population mysteriously vanished by the spring of 2007.  Then by the end of 2008, one in three hives was left lifeless.  Simply put, the honeybee is disappearing at an alarming rate across the entire globe.  The worst part is that those in the know are not sure why this is happening, but they do know that should the increasing catastrophe not be addressed and solutions to the problem not found, the complete loss of honeybees as pollinators would mean the end of agriculture as we know it.  Since much of what we wear and one third of what we eat depends on the pollinating activity of honeybees, our way of life and civilization would be threatened.  In fact one report said the situation is so dire that mankind would survive only 4 years after the complete collapse of the honeybee population.

Then God said, “I give you every seed-bearing plant on the face of the whole earth and every tree that has fruit with seed in it. They will be yours for food.  And to all the beasts of the earth and all the birds of the air and all the creatures that move on the ground—everything that has the breath of life in it—I give every green plant for food.”  And it was so.  ~Genesis 1:29-30   ✝

Take thy spade,
It is thy pencil;
Take thy seeds, thy plants,
They are your colours.
~William Mason, English poet, editor, and cleric

The level of sand in summer’s hour glass may be low, but, and in spite of August’s  lingering heat, there is yet to come a fair measure of glory in the garden.  The cycle of earth’s fruiting isn’t completely over here in north central Texas until Jack Frost’s frigid touch rings the death knell in mid-November or early December.  So the remaining modicum of flowers will be joined in the coming days and weeks with substantially more blossoms.  Moreover, squirrels aren’t finished gathering nuts, birds have songs yet unsung, pollinators have more rounds to make, and roses have a second flush of blooms to proffer.  But most of all autumn is the time for we who “dwell in gardens” to plant, sow seeds, and raise our voices in gratitude for what the Lord has already graciously given us.

You who dwell in the gardens with friends in attendance, let me hear your voice.  ~Song of Songs 8:13  ✝