Magic is really only the utilization
of the entire spectrum of the senses.
Humans have cut themselves off
from their senses. Now they see only
a tiny portion of the visible spectrum,
hear only the loudest of sounds;
their sense of smell is shockingly poor,
and they can only distinguish
the sweetest and sourest of tastes.
~Michael Scott

…there will be heard once more the sounds of joy and gladness, the voices of bride and bridegroom, and the voices of those who bring thank offerings to the house of the Lord… ~Excerpt fro Jeremiah 33:10 and 11  ✝

Spring has returned.
The Earth is like a child
that knows poems
by heart.
~Ranier Maria Rilke

The cycle of nature—the progress from seed to fruition
to dying-off and then renewal in the spring—
was mirrored in the wild fields and the cultivated garden alike,
while the fragility of harvest—the possible interruption of
the cycle by drought, wind, or other natural calamities—
established the pattern of how humans understood
the workings of the cosmos.  The oldest of surviving
sacred stories have their roots in the garden
and reflect how humanity sought to understand
the changeable patterns of their world and, at the same time,
to imagine a world no longer subject to change.
~Peg Streep

See! The winter is past…flowers appear on the earth; the season of singing has come, the cooing of doves is hear in our land. ~Song of Songs 2:11-12   ✝

A handful of patience is
worth more than a bushel of brains.
~Dutch Proverb

A black bird outside pecks slowly at the ground as is his calling, and squirrels steadily dig holes for burying acorns in the flowerbeds as is their timely task. And I, I sit watching and foraging though my mind’s limited storehouse of knowledge to find understanding of a contrasting human frailty. It seems we, humans that is, are forever in a hurry, searching for and wanting something else or something more while still unsure of what to do with who and what we are and already have. Yet, above leaves float down without dissent as they always do in autumn, rain drips unquestioningly off the roof as it does after every storm, and the Lord speaks without fail in the silence about His perfect plan and faithful provision for everything and everyone. Throughout the whole of life, God tries to teach His children to be patient and to yield to His will and timing. He asks that we submit thankfully to and accept with gratitude His provisions and plans for our lives, and He also requests that we develop unfaltering faith in trusting Him to be faithful to His promises and accepting of His timetable for bringing them about.

We have only this moment,
sparkling like a star in our hand –
and melting like a snowflake.
~Marie B. Ray

So, if crows, squirrels, leaves, rain and such do this, isn’t it time for us to quit frantically looking for more, to be accepting of what already is, to be grateful for all that we have and are, and simply to listen as well as comply like all else in the natural world?

“Do not conform any longer to the pattern of this world, but be transformed by the renewing of your mind. Then you will be able to test and approve of what God’s will is–His good, perfect, and pleasing will.” ~Romans 12:2   ✝

The cycle of nature—the progress from seed to fruition to dying-off and then renewal in the spring—was mirrored in the wild fields and the cultivated garden alike, while the fragility of harvest—the possible interruption of the cycle by drought, wind, or other natural calamities— established the pattern of how humans understood the workings of the cosmos.  The oldest of surviving sacred stories have their roots in the garden and reflect how humanity sought to understand the changeable patterns of their world…  ~Peg Streep 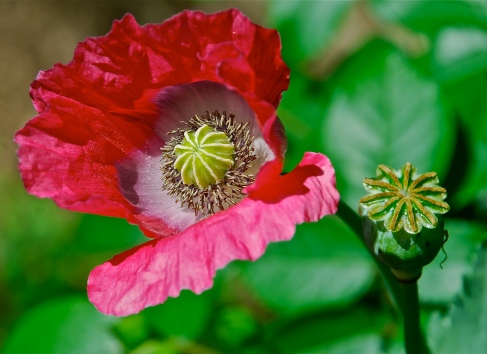 There is nothing better for mortals than to eat and drink, and find enjoyment in their toil.  This also, I saw, is from the hand of God; for apart from him who can eat or who can have enjoyment. For to the one who pleases him God gives wisdom and knowledge…  ~Ecclesiastes 2:24-26a  ✝

**In the photo is a pink poppy in bloom next to one that has already lost the petals which surrounded its seed pod. 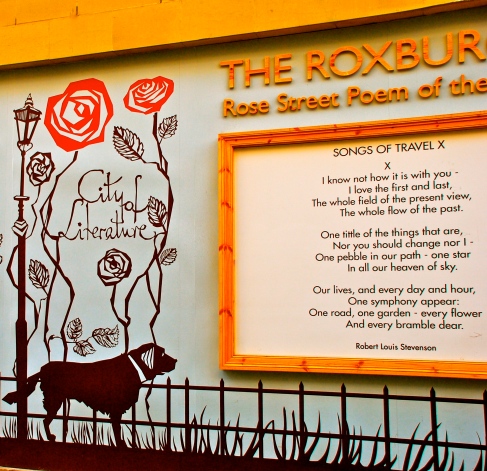 There are “wordless voices,” as Foris suggests, and they speak in a variety of ways.  Some are heard in music instead of poetry while others are witnessed in the spectacle of a drama or ballet, or they may be perceived in the steps and rhythm of a dance routine.  Humans can’t help but find a way to express what profoundly breaks into their inner silences and urges expression for they, being made in the image of a limitless Creator, are innately creative in some way.

As for me an artist or a poet I am not, but the desire to be gifted in such a way inhabits my soul.  I’ve tried my hand many times at being both but any real talent for either continues to be imprisoned within me.  So now with no “appropriate liberator” in sight I try only with my camera to satisfy the yearning of my incarcerated artist, and from time to time, at least in my own eyes, I achieve a marginal level of success.  How could I not for in its vast array of choices, the earth is a wondrous wellspring even with nothing more than a point and shoot camera.  As for my jailed poet self, her craving is partially satiated because life and the natural world have a way of writing their own poetry even in a photograph and because accomplished others have published readily, accessible poetic works.

Most cats do not approach humans recklessly.
The possibility of weapons, clods, or sticks
tend to make them reserved. . .
Much ceremony must be observed,
and a number of diplomatic feelers put out,
before establishing a state of truce.
~Lloyd Alexander

A beautiful stray cat came into our world some time back, and slowly but surely we managed to earn some of his trust.  From his size at the time he started coming into our yard we decided he was about a year old, and from his behavior it was apparent he had had some unfriendly encounters with humans.  However, as time went on he seemed to take more and more of a liking to us, and eventually he chose to stay in our yard most of the time.  As he became more accustomed to our presence, he started letting us get close enough to pet him.  Then one day he began loving us back in the way that feral cats do, but the exchanges were always done with that predictable element of guarded caution.  For example when I’d be out working in the yard, he’d follow me wherever I went and throw himself down to nap while I worked, but he never fell so fast asleep or got so close that he couldn’t make a fast get away if need be.  As the months passed he became more accepting of us, so much so that he followed me into my studio one afternoon and napped there.  Subsequently that became a daily thing, and he would even remain there on cold, cold nights.  After that winter, we were so in hopes he would one day let us pick him up and get him in a carrier to go to the vet’s for his shots and neutering.  Sadly though his trust fell just short of that.

The cat clawed its way into my heart
and wouldn’t let go. . .
When you’re used to hearing purring
and suddenly it’s gone, it’s hard to silence
the blaring sound of sadness.
~Missy Altijd

For a short period of time this yellow cat we named Beastie called our yard his home. We had managed to establish “a state of truce” with him, but as it turned out it was never going to be a complete surrender.   One day the call of the wild became much stronger than the call of the safe and secure.  The first time he left us, he was only gone for 6 days, but then he left again the next day for another 5 days.  After the third departure we never saw him again.  What became of our little feline friend we’ll never know.

Give sorrow words;
the grief that does not speak
whispers the o’er fraught heart
and bids it break.
~William Shakespeare

When Beastie disappeared for good, he took pieces of my heart with him, and if I hadn’t given my grief to words, as Shakespeare suggests, I fear my “fraught” heart would have broken and all its chambers flooded with tears.  Jean Burden was right when she said, “Prowling his own quiet backyard or asleep by the fire, a cat is still only a whisker away from the wilds.”  The Beast Man was never far from his feral beginnings, and when the wild called, he could do naught but answer.  Agnes Repplier summed it up best when she said, “it’s impossible to banish these alert, gentle, and discriminating little friends, who give us just enough of their regard and complaisance to make us hunger for more.”  Indeed, I have hungered for more ever since; in fact I’m still hungering and hurting because there’s no more of his sweet life to be shared.  My big backyard that I love so much seems like an empty and lonely place without that “silly” yellow cat to keep me company.  He was a confidant and consultant in my garden dreams and schemes, and I was his protector from pesky mockingbirds wanting to keep him from their nests and from any and all suspicious human interlopers.  I know I need to put this behind me and move on, but it has been a long time since grief has had so heavy a hold on my heart.  There was just something compelling and charming about that sweet boy, and he, a cherished presence too soon lost, will be forever missed.

Out of the bosom of the Air,
Out of the cloud-folds of her garments shaken,
Over the woodlands brown and bare,
Over the harvest-fields forsaken,
Silent, and soft, and slow
Descends the snow.
~Henry Wadsworth Longfellow

Our area, that had been desperately in need of rain, was the beneficiary of fortuitous events on Christmas Eve.  Could it be that the celebration of the Messiah’s coming the night before was what prompted the blessing of rain as well as the magical, miracle of snow.  So many voices were lifted up in praise and worship of Him that our petitions for rain might have been heard as well. Occasionally on cold, crisp wintry days or nights layers of snow blanket God’s creation even here in north central Texas, but this time we received a strange mixture of “wet” goodness.  At eventide sparkling stars punctuated the ancient moon in heaven’s blackened dome, but during the course of the Messiah’s birthday, clouds laden with moistures moved in, flashes of lightning lit up the sky, a good amount of rain was garnered, hail fell, and finally snow covered the landscape.  If this is not an assortment of  Divine providence mixed with earthly “enchantment,” then as Priestley says, “where is such to be found?”