Now winter nights enlarge
The number of their hours;
And clouds their storms discharge
Upon the airy towers…
~Thomas Campion

Gray, foggy dreariness
ushered in the day;
A mist, a cold, frigid drizzle,
fell from on high;
Bare, starkly austere, lay everything
I could see; and
Silence, a stilled quietude, blanketed
my wintry garden.
Bleakly naked, towered tall trees that
stood above all else,
But underneath them from the secret place
murmured a voice,
The sacred, almost indistinguishable, faint
whisper emerged amid
The fog and fine rain to go forward undetected
past the woody sentinels
To allow its utterances to break into morn’s reverie
to tell of signs, longed for signs
Of tiny sparks of life that are preparing to push up
despite the gloominess
And ‘twas this message that stirred embers in my spirit
to keep their glimmer from
Becoming far too dim to continue sustaining my hope,
expectations, and “joie de vie.”

Don’t think the garden loses its ecstasy in winter.
It’s quiet, but the roots are down there riotous.
~Rumi

The tempest comes out from its chamber, the cold from the driving winds. ~Job 37:9 ✝

**Both photos taken by Natalie

And now November rains erode the nests
That mourning doves assembled in the gardens
From where their mild and wind-warm coos caressed
My ear, to quiet earth that cools and hardens
~Edward Alan Bartholomew 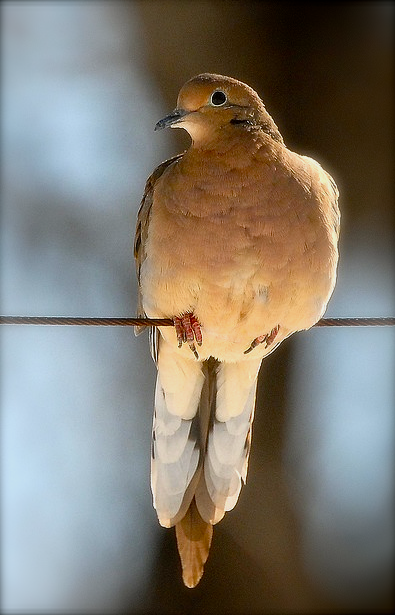 As I worked in the yard today, a mourning dove somewhere above my head sang her sad, sad tune in the dwindling hours of the late November day. Although I could hear her long before I could see her, eventually I spied her and her soft, pinkish underbelly on the high wire where she sat in an intermittent reverie between her sorrowful cries. Perplexed by her pleas I sat pondering the meaning of the doleful melodies. Why does she cry I wondered? Does she lament the closing of the day and the dark, moonless night that lies ahead? Have her children come and gone too soon? Where is her lover that he might console her? Is she hungry? Is she frightened? Surely she doesn’t lament the regrettable affairs of men. Then I noticed that the stone rabbit with the upright ears seemed to be pondering her despair as well. Again I mulled over what the cause of her woe might be. The weather and the garden, though not perfect this time of year, should be no cause for such sorrowful sounds. Other birds had for sure been chattering gleefully which made her cries and lamentations even more pitiful. Cooah, coo, coo, coo she’d called over and over again as the day wound down, and then suddenly just before all light was gone her melancholy voice vanished. And then it occurred to me that perhaps her haunting, soulful sounds were simply songs of praise for another day of living and it was time to rest her weary wings.

I often think that the night
is more alive and more
richly  colored than the day.
~Vincent Van Gogh

On a dark, windy November night huge raindrops were slapping autumn leaves against the car or sending them whirling, willy-nilly all around us. As we drove on towards home, more and more of the colorful foliage litttered the slick black pavement ahead of us. As I listened to the sound of the leaves and rain smacking against the windshield in addition to the clicking back and forth noise of the wipers I was being lulled into a deep reverie of personal reflection. But as we turned onto a more traveled thoroughfare, the bright street lights illuminating our neighborhood duck pond broke my preoccupation with the day’s troubling matters. At that moment I looked up, away from my thoughts, and saw a few mallards and some geese gliding serenely along on the reservoir’s glazed, rain-spattered surface. In the halo-like light and the falling rain, the buoyant creatures looked surreal. They were like visions of floating grace and peace seemingly sent to testify that God is with us even in the midst of bothersome realities on cold, rainy nights.

A warm and cheery fire roars merrily
And shadows dance about the darkened room.
Beside the hearth a gardener sits and dreams
Of sunny days, of flowers in full bloom.
Some hollyhocks should tower near the fence,
Bright red ones that the bees can’t help but find.
The trellis at the gate again must wear
Blue morning glories, or the rosy kind.
To lend a bit of distance to the scene,
Close to the rear I’ll plant in shades of blue:
The tall and stately larkspur, double ones­
Of course I’ll put in scabiosa, too.
I couldn’t do without a pansy bed­
Snapdragons make such beautiful bouquets­.
Frilled zinnias and yellow marigolds
Add just the proper touch to autumn days.
The flowers grow and bloom with loveliness
Until a sound destroys the fantasy­
A burning ember falls and I must leave
My garden and my charming reverie.
~Helen Bath Swanson

I will sing to my God a new song: O Lord, you are great and glorious, wonderful in strength, invincible.  ~Judith (Apocrypha) 16:13  ✝

Man becomes aware of the sacred because it manifests itself, shows itself,
as something wholly different from the profane.
In each case we are confronted by the same mysterious act–
the manifestation of something of a wholly different order,
a reality that does not belong to our world,
in objects that are an integral part of our natural “profane” world.
~Mircea Eliade, Romanian historian, writer, and professor

Although I dearly wish it were, the statue in the photo is not in my garden.  She is one of several scattered around our city’s Botanical Gardens.  The captivating sculpture in her quiet reverie and reverence is not unlike a “be” verb in that she expresses a state of being, and I think she does it ever so engagingly.  In fact, when I look at her, especially her bowed head, I get the feeling I’m observing someone deep in contemplative prayer.  Given that, I’m always a little reluctant at first to move in too close for fear of disturbing her petitions.  William Faulkner said that “the aim of every artist is to arrest motion, which is life, by artificial means and hold it fixed so that a hundred years later, when a stranger looks at it, it moves again since it is life.”  How successful then was the artist who crafted this bronze “lady of the garden!”  I’ve always sensed life and movement in her, and as an admiring observer, I am moved inwardly in her presence.  Her movement is not flamboyant; instead it is more of a faint in and our movement of breath.  Another thing that fascinates me about the statue is that there is a warmth in her presence even on bitterly cold, wintry days.  It’s a kind of glowing warmth that speaks of life, holy and not in the least profane.

Sing to Him, sing praise to Him; tell of all His wonderful acts.  Glory in His holy name; let the hearts of those who seek the Lord rejoice.  Look to the Lord and His strength; seek His face always.  ~1 Chronicles 16:9-11  ✝

Water, the Hub of Life.
Water is its mater and matrix, mother and medium.
Water is the most extraordinary substance!
Practically all its properties are anomalous,
which enabled life to use it as building material for its machinery.
Life is water dancing to the tune of solids.
~Albert Szent-Gyorgyi 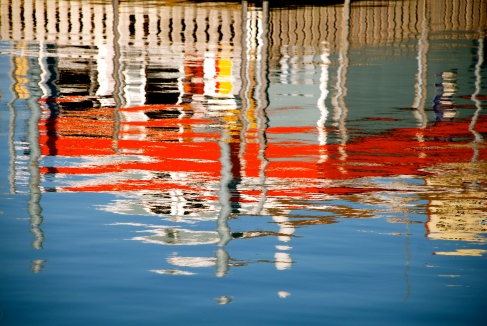 Seldom do I see a body of water that it doesn’t seduce me with its wiles into a meditative reverie.  In that quiet stillness I feel drawn to peer down into its mysterious depths until imagined or perhaps real images of earth’s origins come alive.  Water seems to possess in all its forms and properties extraordinary qualities so otherworldly that the phenomena of water reaches down and touches pools in “the temple of the inner being.”  While looking into its depths an unmistakable awareness of the Divine’s presence surfaces and holiness rises like a mist.  Gauzy reflections in water quiver and quake as if they possess a life of their own.

Although I know not where it rests in the human psyche, I believe somewhere therein mortals remember their watery beginning and recognize familiar things not of this world, things they know without tutelage or reason.  In the same way a child instinctively recognizes its biological mother after the umbilical cord is severed, I believe we, who are separated here from the Source of our being, retain a sense of His parenting presence because we are of the Lord and inextricably a part of Him.