Every leaf speaks bliss to me
fluttering from the autumn tree.
~Emily Brontë Brisk breezes are moving across the landscape today, and as a result it’s raining confetti-colored leaves. So it is that bone by bone by bone the garden’s structure is reappearing whilst that which was fleshed out in spring and summer withers or falls away. These, the yard’s skeletons, will remain, holding tightly to their promised renewal throughout months steeped in wintry chills. Even though bare and stripped of visible signs of life, they will yet proffer a comforting presence and a kind of beauty to those who watch and wait during cloudy coldness and rarer bouts of the sun’s warmth and mercy. And though they become pale and wan and washed in grays and beige, in the spreading silences, the wind whispers that they and life–that spark, that miracle, that breath–have not been vanquished; all is not lost as down, down, down into coming winter’s “vale of grief” we go.

Sovereign Lord, you are God! Your covenant is trustworthy, and you have promised these good things to your servant. ~2 Samuel 19:23   ✝

There is a peacefulness in a gray, cloudy day.  The air, normally charged with energy from the sun, loses its intensity and floats lightly on the gentle wings of tranquil contentment.  Noises are quieter and more mellow under lowering, billowy clouds not angry with the fury of storms.  My steps are slower, less urgent, as I move on the footpaths of the routine daily tasks before me.  Pushing up from deep within a still, small voice, often neglected, is more audible in the day’s silences.  It speaks of matters of the heart and the spirit, never of worldly affairs, nor greed, nor lust, nor gain in this world of men and madness.  Instead the voice nudges me to be in active pursuit of His plans for my life, not in the grand designs of my own folly.  It tries to keep me from complacency hiding under the guise of ignorance and brings light into dark places where I’m to face bigger issues that I often would rather ignore because it’s so much easier to do so.  The voice is not, however, a judgmental one; it is instead an encouraging, affirming agent that lifts me up on high, sacred ground.

Slow buds the pink dawn like a rose
from out night’s gray and cloudy sheath;
softly and still it grows and grows,
petal by petal, leaf by leaf.
~Susan Coolidge 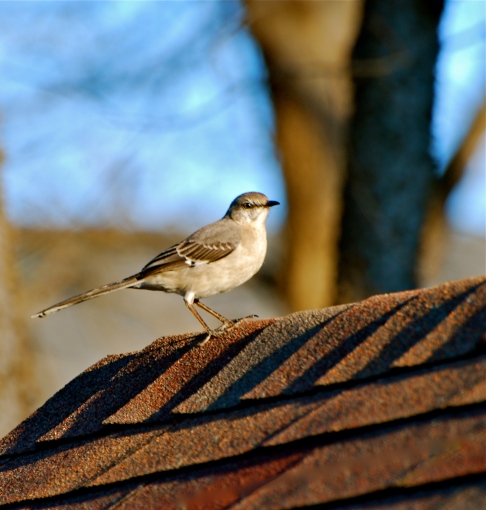 Tired of tossing and turning, I got up out of bed and went in to rock in my favorite chair.  Not wanting to miss the “slow budding” of dawn’s light, however, I first raised the bamboo shade in front of the glass, patio-doors.  After a short wait a faint pinkish glow appeared low on the horizon in the eastward sky, and as the sun inched up and up and up, a ray of golden light poured through an opening centered in the heart of a tall tree framed against it just above a neighboring housetop.  The branches of the tree then took on a hallowed appearance so much so that a bird atop the roof and two squirrels sitting very still in nearby branches looked like parishioners in pews awaiting the high priest.  Later, as the sun climbed high enough for night’s curtain to be lifted completely off earth’s stage, it was apparent that all who’d seen this amazing “salutation of the dawn” were summoned to make ready for the new day.  The first to respond was a flock of birds darting willy nilly across the pastel blue sky in search of food, but beneath them as more and more drops of light appeared like jewels aloft in the bamboo I knew that despite a restless night the time for me to rise had come as well.