We feel cold, but we don’t mind it
because we will not come to harm.
And if we wrapped ourselves against the cold,
we wouldn’t feel other things,
like the bright tingle of the stars,
music of the Aurora,
or best of all the silky feeling of moonlight on our skin.
~Philip Pullman 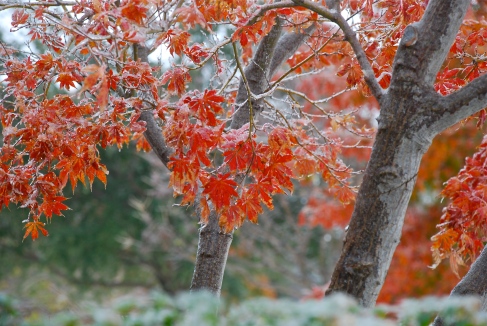 After last night’s winter storm, we woke to find the ground, the streets, and the rooftops covered in a solid blanket of sleet mixed with snow.  Icicles were hanging from eaves and other solid objects; branches, stems, leaves and the few remaining roses had been encapsulated in ice.  The forbidding frozen world outside was steeped in silence but for the occasional gusts of wind that sent falling leaves round and round in capricious little whirlwinds tapping softly against the icy ground.

In the coming days the garden will shrink dramatically.  It’s beauty will be harder to see, but for those who continually walk its paths with searching eyes and vivid memories, emerging treasures can be spotted and glory envisioned in places where it was and shall rise again from seeming nothingness.  During the warmer spells in the next few months, I’ll clean up the growing season’s spreading, untidy tangle and reshape her fetching figure while below in her fertile womb mysteries, ancient and sacred, are coming together to birth yet another springtime.

Then the Lord spoke to Job out of the storm.  He said From whose womb comes the ice?  Who gives birth to the frost from the heavens when the water become hard as stone, when the surface of the deep is frozen?  ~Job 38:1 and 29-30  ✝

8 thoughts on “208. It is the life of the crystal, the architect of the flake, the fire of the frost… ~John Burroughs”