Look out! Look out!
Jack Frost is about!
He’s after our fingers and toes;
And all through the night,
The gay little sprite
Is working where nobody knows. 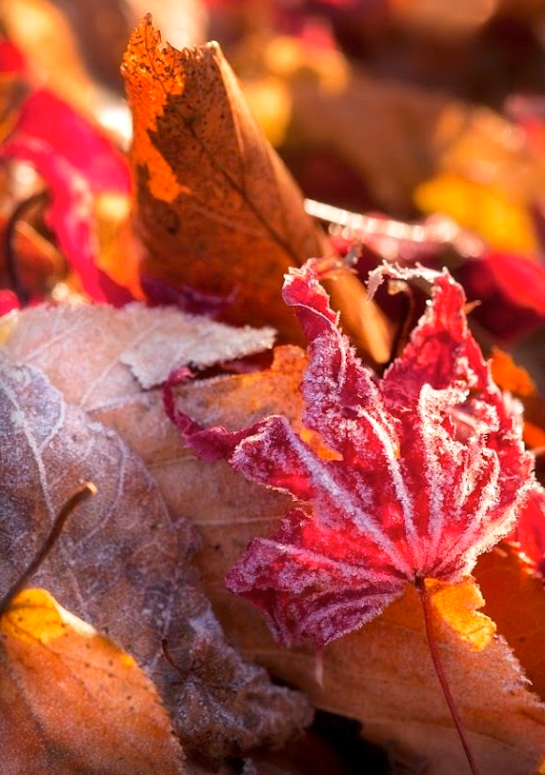 He’ll climb each tree,
So nimble is he,
His silvery powder he’ll shake.
To windows he’ll creep
And while we’re asleep
Such wonderful pictures he’ll make.

Across the grass
He’ll merrily pass,
And change all its greenness to white.
Then home he will go
And laugh ho, ho ho!
What fun I have had in the night.

Frost performed “its secret ministry” as sleep held us close in the night, and when I awoke it lay twinkling like stardust atop things in the garden and on the lawn. Then as dawn’s early light kissed our few colorful autumn leaves, it turned them into glowing golden nuggets or the color of crystalized, reddish ripe persimmons or the usual, splendid oranges of advancing autumn. And as some of the leaves tumbled to the ground, winds blew them into little swirling eddies that played like happy children upon the lawn and in the street. O Autumn, your magic does indeed bring a sense of spectacular glory even as Spring and Summer’s progeny perish.

There is a playful side of nature, and there is a playful side in us which tells me that the Lord too knows something of playfulness since we are made in His image. Anyone who has seen or heard how breezes play in rustling leaves, how raindrops splatter and play on rooftops, how squirrels chase each other round and round a tree trunk has witnessed God’s sense of playfulness.

“Does the rain have a father? Who fathers the drops of dew? From whose womb comes the ice? Who gives birth to the frost from the heavens when the waters become hard as stone, when the surface of the deep is frozen?” ~Job 38:28-30   ✝