The flower offered of itself
And eloquently spoke of God
In languages of rainbows
Perfumes,
And secret silence. . .
~Phillip Pulfrey, photographer, painter, and poet 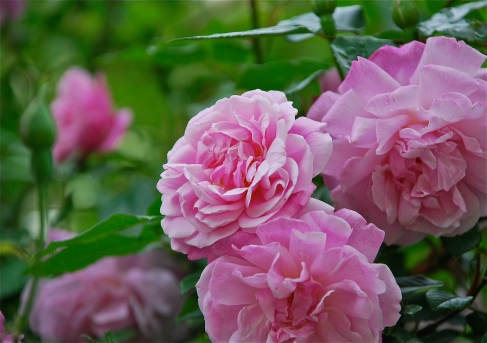 Almost comically what brought roses to Texas began with a “slow boat to China,” as it were.  The Chinese had been cultivating roses for over 5,000 years. Then during the early 19th century, ships of the East India Company brought the repeat-blooming China roses from the Orient to Europe.  Once there the Europeans bred the China roses with their once-blooming roses.  Eventually progeny of the old China roses, the once-blooming European roses, and their hybrids were brought to the Americas by the early settlers.  However as time passed, the public grew to have a greater desire for the more modern roses, and nurseries stopped offering old roses.  Thankfully in the last couple of decades there has been resurgence of interest in the old garden roses, and they are readily available to the public again.  In my garden most of the 70+ roses I’ve planted are roses of antiquity.  I’ve found that they are much hardier, and I love wondering what roads they must have traveled to get here, but the best part is that in every season my old garden roses speak to me more and more distinctly of God, His love, and His faithfulness that can be seen in His rainbows.

I have set my rainbow in the clouds, and it will be the sign of the covenant between me and the earth.  -Genesis 9:13    ✝

*In the photo is the China Rose named, among other things, “Old Blush.”  She is one of the most famous of the China roses and an important parent of literally thousands of other roses.  She is generally accepted as the first East Asian rose cultivar to reach Europe.