Autumn, that season of peculiar and inexhaustible influence
on the mind of taste and tenderness,
that season which has drawn from every poet,
worthy of being read,
some attempt at description, or some lines of feeling.
~Jane Austen 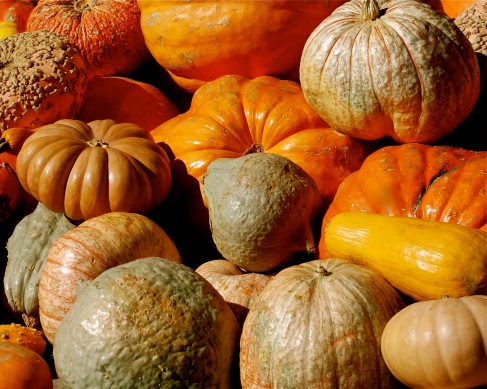 While the summer sun reigned high in the heavens, the trailing vines of Cucurbita inched along the ground.  Its flowers were pollinated, and then its fruits began to grow.  Tendrils on the vines helped anchor the rambler and protect them from the wind.  The leaves of the vines absorbed energy from the sun to spur the growth of the fruits, and the stems worked like umbilical cords to bring nutrients to the fruits while the thin and shiny outer layer of the fruits protected them from insects and disease.  As summer wound down, the ripening gourds began turning a spectacular color of orange, at least the traditional ones.  Then after the autumnal equinox, north winds venturing out of their haunts moved southward.  Along the way they gathered a fair measure of clouds; rain from the clouds greened the landscape; days became noticeably shorter; temperatures dropped below previous three digit highs; skies regained deeper hues; dawns became chillier; and the inimitable pumpkin, having been nipped off its vine, appeared on roadside stands and in grocery stores.  How I love Octobers and the whole autumn experience; hardly a day goes by that I don’t turn my eyes upward in praise, drop to my knees in thanksgiving, and wish I could throw my arms in adoration around  the Lord of all Creation!